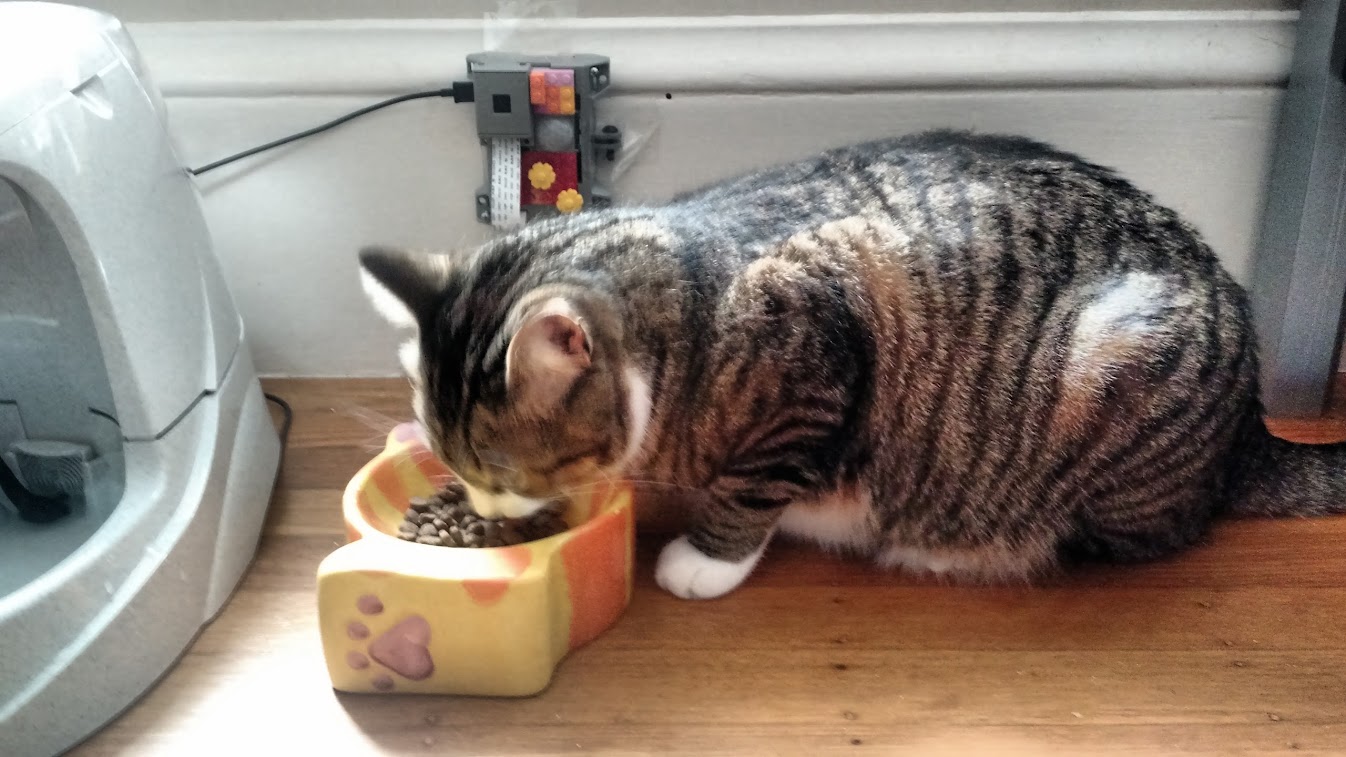 Ho, ho, ho! This is an overdue blog post for the project I’ve worked on during summer!

Last August, I created this Raspberry Pi app using a camera and PIR motion sensor, written in Node.js with helps with Johnny-Five and KittyDar. As I promised on the README file of the GitHub repo, I am finally writing the detailed instruction of how I built hardware and wrote the app. 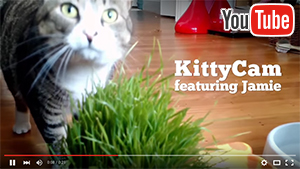 The software is written in Node.js, simply because JavaScript is the language I am most comfortable with, also it is fun!

This is the basic flow: 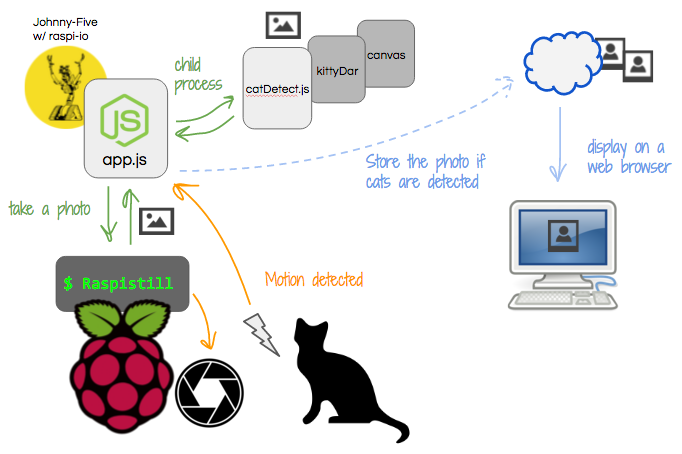 The hardware-software communication is done with Johnny-Five, open-source JavaScript robotics programming framework. I am using it to talk with a PIR sensor. When the sensor detect my cat (or any moving objects) nearby Raspberry Pi, it triggers the camera.

Photos are taken using raspistill command line. One cool thing about Node.js is that you can execute commands by spawning child processes.

Once a photo is taken, I am using another child process to detect if any cats are on the photo, using KittyDar, an open source face detection for cats, written by Heather Arthur.

Additionally, I am sending the photos (only photos with cats) to a cloud storage, and at the same time, I stream the photo to web browser using PubNub, because I work for the company!

Now, let’s build your own!

Building the Circuit with Raspberry Pi 2

First, you need to get some hardware along with Raspberry Pi 2. I don’t recommend any older Raspberry Pi, as their memory is too low to run some code.

The Pi needs to be pre-installed with Raspbian OS. And if you are starting from a scratch, with Raspberry Pi fresh out of box, you can take a look at Setting up Raspberry Pi section of the instruction I wrote for my workshop I give at conferences sometimes.

But if you are a newbie, I recommend to buy your first Pi from CanaKit, so you don’t need to set it up all by yourself. 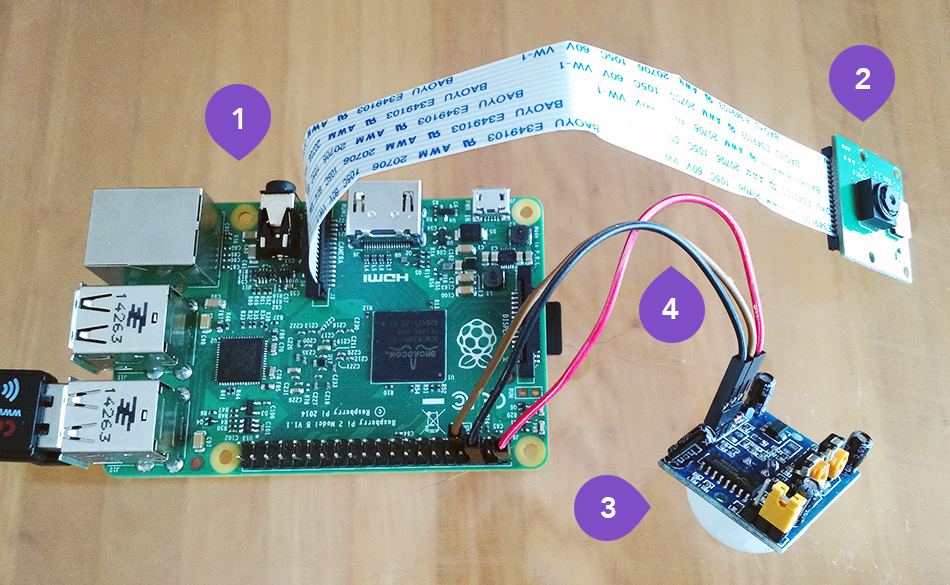 This doesn’t require much of wiring. You can connect a camera and a PIR sensor directory to a Pi without any breadboards or soldering, as you see in the photo above at the previous section, or this Fritzing diagram below. 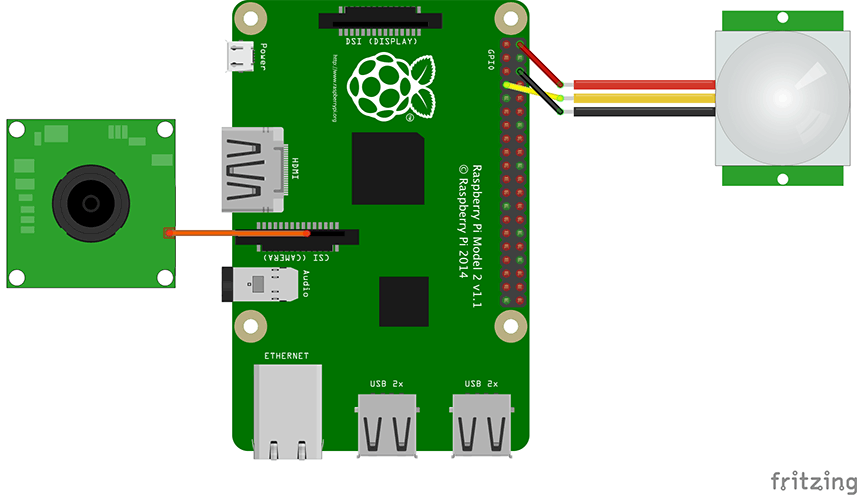 The photo below is my Pi enclosed in SmartiPi case: 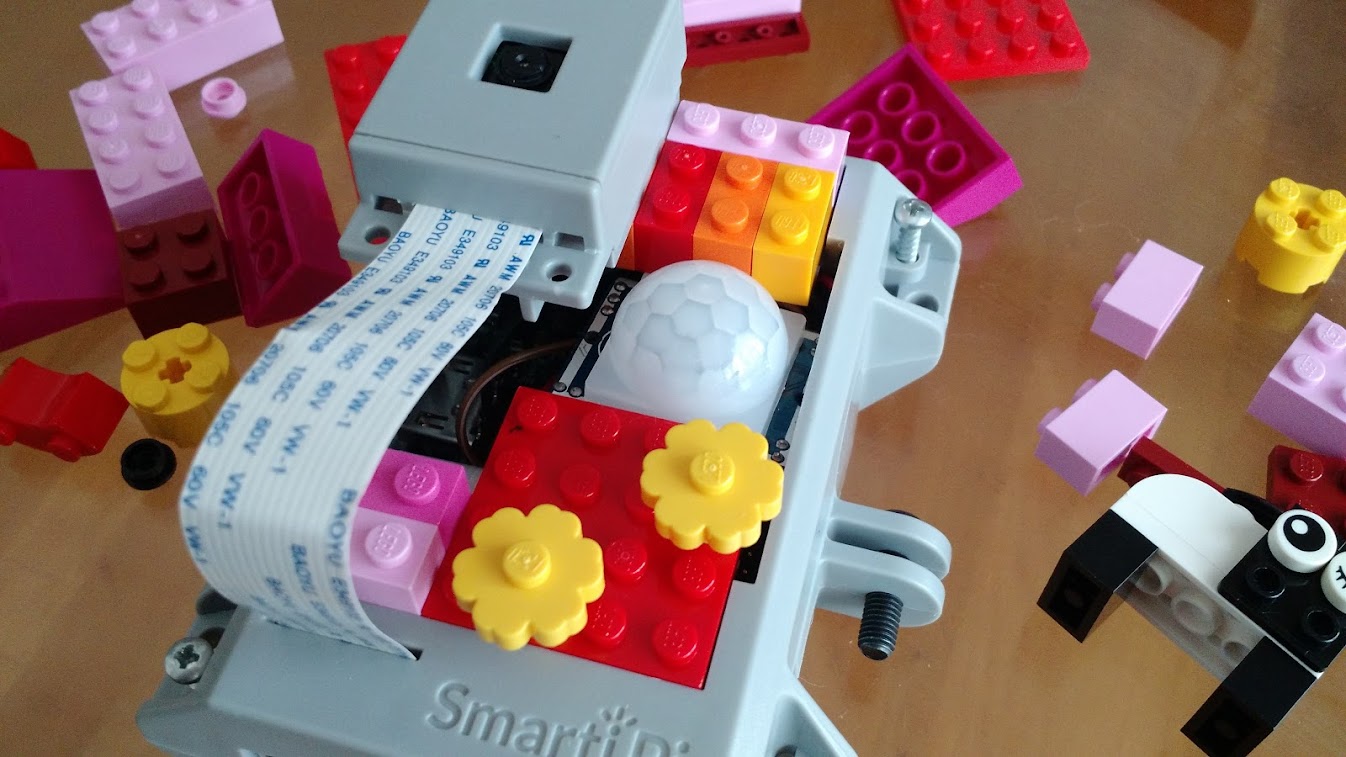 You can plug in a monitor, keyboard, mouse, etc to your Pi and work directly on Raspbian GUI, or work from you Mac, like I usually do. This is how I work remotely on Mac:

First, make sure your Pi and computer are on the same WiFi network.

If you are directly connecting your Pi to a monitor and a keyboard, open a terminal, and find the IP address:

Or use some IP scanner app on Mac, like Angry IP Scanner to scan all connected devices.

Once you find the IP address, open a terminal app on Mac, and ssh into the address. I am using the default username for Pi, “pi”.

Once connected to your Pi, you can create files, code, and execute from the terminal. Raspbian is a Debian based, so you can use usual linux commands.

Coding on Your Fave IDE on Mac

I usually use Sublime Text to code, so I prefer doing so for coding on Pi as well. Here’s what I do:

Then connect your Pi via SSH, using its IP address (See the screenshot below) 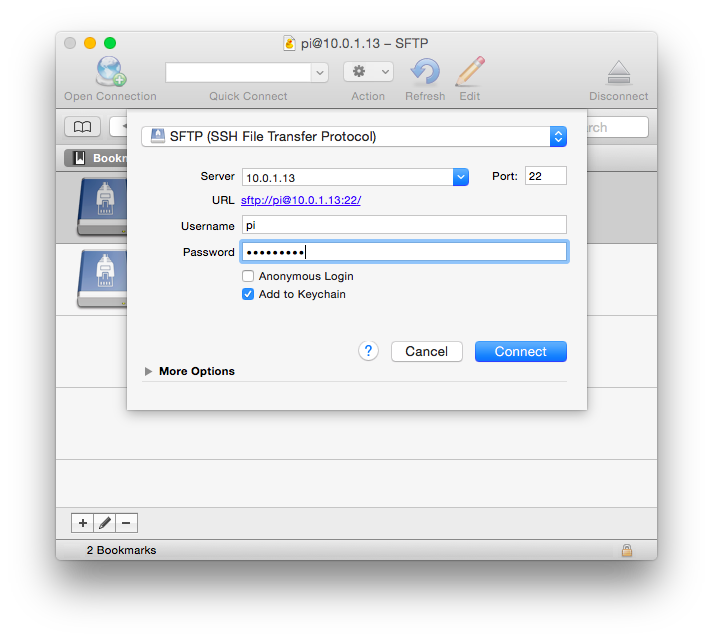 When you edit a file, open the file with “Edit”. 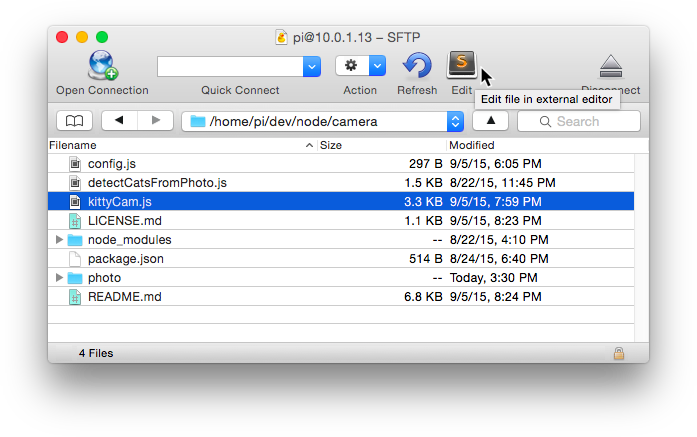 In my case, it automatically select Sublime to edit JavaScript files.

1. Install node.js in your Raspberry Pi

Make sure your Pi is up-to-date!

Let’s download node from node-arm, which is probably the easiest way:

and install the package:

Check if node is successfully installed.

To be able to use a hardware camera module with your Pi, you need to enable the software first.

Go to Pi Software Config Tool menu from a terminal:

You should see the menu like this. Use arrow keys to select Enable Camera. 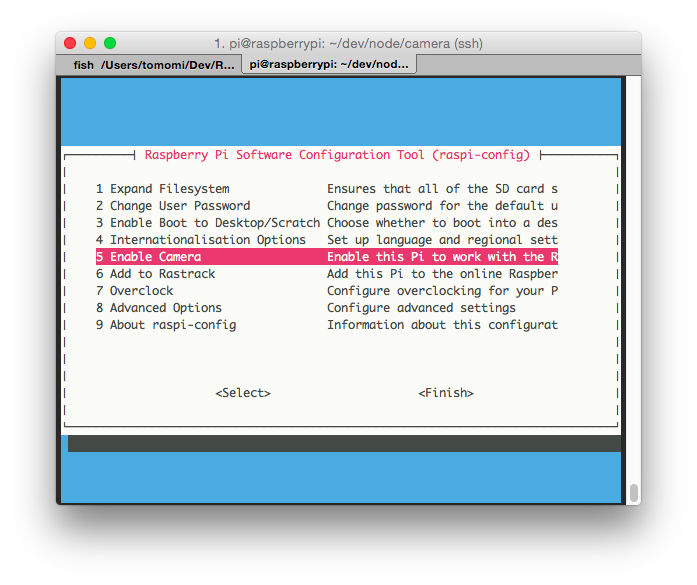 Hit Return, then at the next screen, select Enable.

Test if your camera is working by try typing this command on terminal:

If you wish to run the code from my GitHub repo, clone RPi-KittyCam repo on GitHub, and copy them over on Raspberry Pi.

It would be really nice if $ npm install successfully install all the dependencies, and voilà, but it does not work in that way, unfortunately. You still need to set up and install dependencies manually.

1. Prerequisite: Install Cairo to the System

for cat facial detection, I am using kittydar, which dependencies including node-canvas, which requires Cairo.

So let’s get Cairo on your Raspbian first.

See more info on how to install Cairo for Node Canvas, see this Installation Ubuntu and other Debian based systems

If you download the node_modules contents of my GitHub repo, skip the step 2, and proceed to step 3. Otherwise, go to the next step to manually fresh-install the next several modules. Just running npm install to fetch all dependencies may fail because there is some incompatibilities. (I explain it later).

Now, cd to your working directry, and install dependencies.

You need canvas (node-canvas) to be able to analyze images with KittyDar.

Kittydar is an open-source cat face detection. It takes an image (canvas) and tells you the if cats are in the image.

This is an actual photo taken by my Raspberry Pi, while Jamie was eating, and detected by KittyDar cat facial detection!

Once your environment is set up, in this RPi-KittyCam dir, install node dependency modules.

However, node-canvas 1.0.1 (the version specified in package.json for KittyDar) failed to build with the current Node.js (v0.12.6).

So what I did was download the zip from github repo into node_modules, alter the package.json, where canvas: ~1.0.1 to ^1.0.1 so that the latest canvas is installed as I npm install from the kittydar directory.

Get the zip from my forked repo.

Note: Although, the repo is no longer maintained by the author, I am sending a pull request for the fix.

Johnny-Five is a JavaScript Robotics programming framework. It makes communicating with hardware so much easier.

Raspi-io is a library to be used as an I/O plugin with Johnny-Five. You need to install this to use Johnny-Five on Raspbian.

This step is optional, if you don’t want to create a web interface to stream the photos, or you would rather create your own web server without depending on the 3rd party services.

For realtime live-updating the web interface, I am using PubNub. To use the service, you need to sign up to obtain your API keys.

For storing photos, use Cloudinary. To use the service, you need to sign up to obtain your API keys.

Set up your config.js with Credentials

Create a config.js in the root dir of the app. The file should include your API keys:

Once you have configured everything and have all source files from my GitHub repo, try running kittyCam.js.

You must run with sudo:

The camera will take a photo when a motion is detected by the PIR sensor. Then the child_process runs to detect if there is any cats in the photo. When there are any cat, it sends the photo to Cloudinary.

Analyzed photos are deleted from the filesystem to clear up Pi. 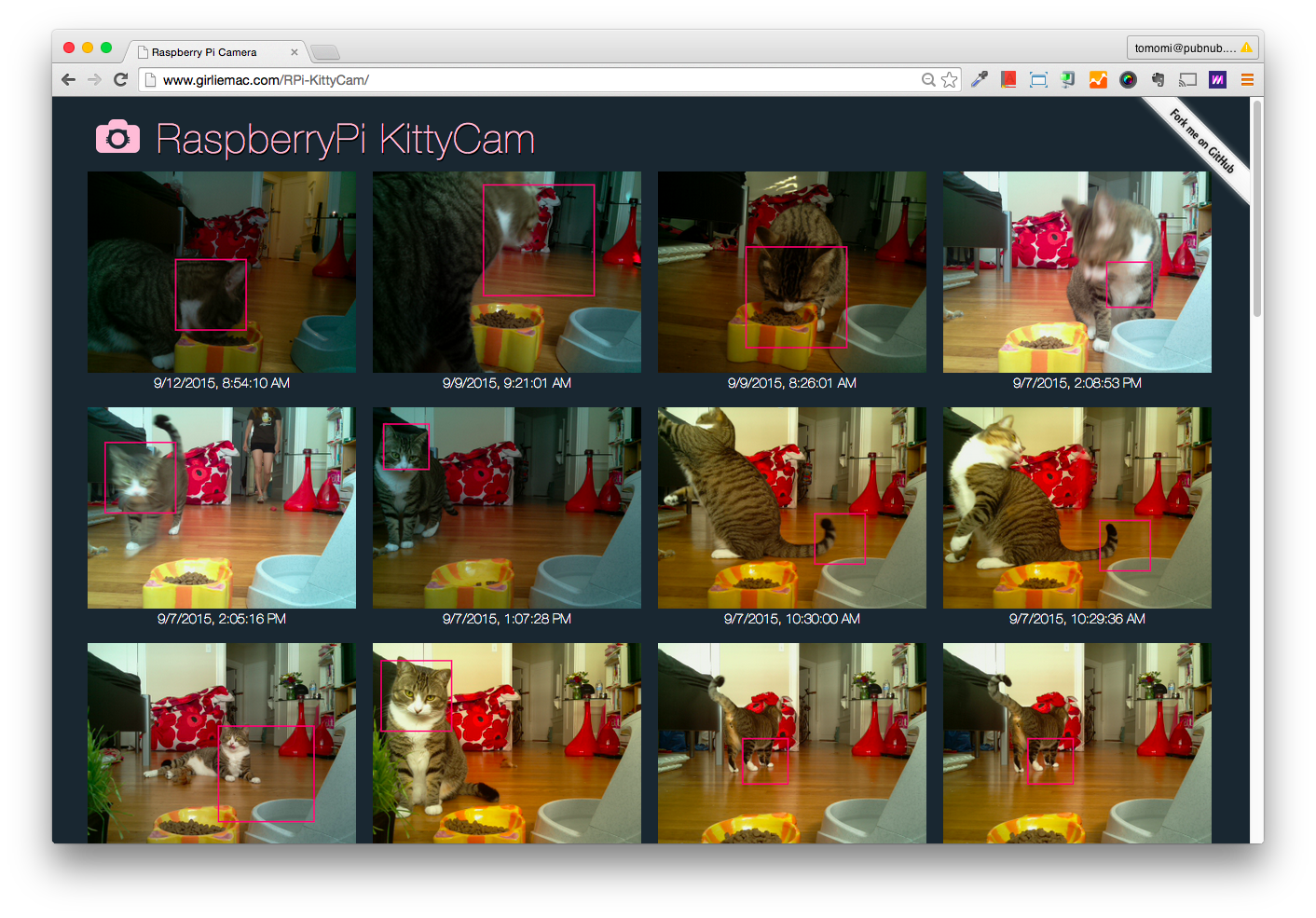 Walking Through the Code

Although I am not writing a full tutorial how to write this Node app from scratch, I can explain some of the key features.

Detecting Motion from a PIR Sensor

I am using Johnny-Five’s IR.Motion object to detect the motion.

First, include the dependencies.

Then, create a new motion hardware instance at pin 7, and when a motion is detected, take a photo:

In the code snippet above, where the first comment is, run raspistill command using child_process.spawn() to take a photo with the camera module:

Here, I am saving photos in sequential orders.

To be able to keep taking photos without interruptions, as each photo is being processed, I am using another child_process, this time with fork(), an instance of spawn thats runs a new instance of the V8 engine to create multiple wrokers.

After the comment in the code snippet above, read another JS file:

In detectCatsFromPhoto.js, start the child process and use canvas and kittydar to detect cats. Once the process is done, the image is returned in Base64:

To see the entire source code, please take a look at my GitHub repo!

Also to see how I used PubNub to stream the live photos on web browser, look at the source code on the gh-pages branch.

The cat photos failed to be recognized

See my last blog post about my experience being on Twit TV! You can watch the segment on the recorded show too.

OK, I hope you enjoyed my lengthy blog post!