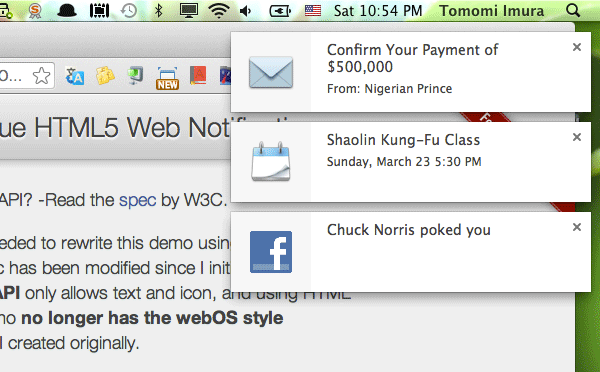 Two years ago, I wrote a demo and blogged about then-Chrome-only HTML5 notifications. A while ago, like, 8 Chrome versions ago, I’ve noticed the demo no longer worked, because the original specication I was using was deprecated for good.

Around the time, started by Apple first, each browser vendors had its own proprietary notifications API, then last year, they have decided to standardized specification.

I finally read the new specifications on W3C recently, and rewrote the demo using the standard API.

In the original demo, I implemented the notifications in webOS 3.0-style UX, which allowed a user to swipe to close the window. (Do you remember HP TouchPad, which was killed soon after the release and gone on fire-sale? I was a UI engineer for the beautiful dead platform.) However, this v2 demo no longer supports the swipable notifications UI because the simplified new Web Notifications spcification only allows text and icon, and external HTML (with JS) files are no longer permitted.

Check out the new demo: http://girliemac.com/html5-notifications-webOS-style (I keep the webOS system config look-and-feel!)

The simplified standard uses Notification object to represent each notification. (No webkit or moz vendor prefixes are required for the supported browsers.)

Notifications can only be displayed if the user has granted permission. Requesting the user agent to ask a user for permission is done as follows:

This process is done asynchronously, and the callback function is called when the user chooses a permission either default, granted, or denied.

Notification fires show and close events during the lifecycle.

To close the notification window after 15 seconds:

As long as I tested, the web notifications API is disabled on Chrome for mobile, while Firefox does support the feature (however, it has a UI issue).

Notifications appear in the native notification bar, one at a time, instead of popup windows from browser.

The problem is that if a notificatin contains more than one lines one messages (when both main text and body are set), only the last line (body) is displayed, instead of the main title, which I think makes more sense. When the notification bar is expanded by a user, both subject and body text are visible (See the screenshot below).

Also, custom icons aren’t shown either. The icon on the notification is always Firefox icon. 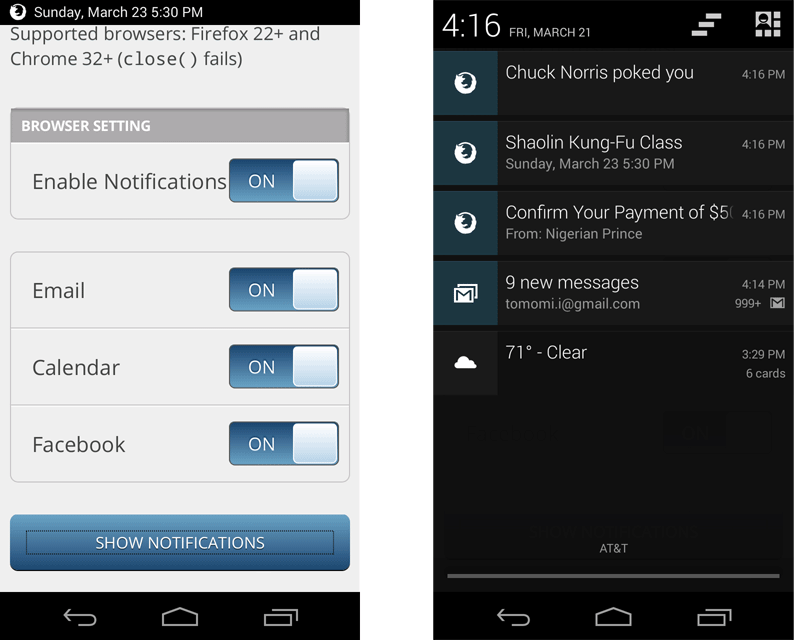