Apple have posted an iPod Touch features guide a few days ago, and I finally had a chance to read it.

As I wrote and posted photos regarding iPhone’s Asian language supports, I was wondering about future multi-language support on iPhone, but now I know that iPod Touch will feature Japanese IME before iPhone does!

According to the manual, iPod touch provides keyboards in 14 different languages, and supports the following keyboard formats:

And now, curious enough, I obtained these visual evidences: 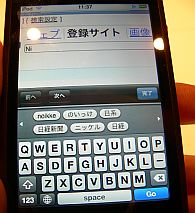